a bit about andy

Although Andy originally hails from the North East of England, he’s been a resident in Linlithgow for the past seven years with his partner and young son. Andy’s been riding, and enjoying, bikes since he was about 4 years old. Starting off with a Raleigh Commando (sadly pilfered by some ne’er-do-well), he then moved on to a Raleigh Meteor. In 1984, Andy managed to get hold of a new breed of bike; a Diamondback Trailstreak (one of the first mountain bikes) from Black’s Cycles in Sunderland. He owned this bike for a number of years, then chose to trade it in for a Trek 4000 from Finch Cycles in Reigate, specifying an upgraded RST Mozo Pro fork at the same time. When that proved too heavy for the commute in Norwich, Andy spec’d up a Dave Hinde Dragon MTB for the road. Again, some naughty people relieved Andy of this bike when he moved to Edinburgh whereupon he opted for a Specialized Pitch Pro which he still owns. With 140mm of travel front and rear, it’s more than enough for tackling the routes around Linlithgow. His stable of bikes grew further when Andy turned 40, with the arrival of a Ragley Blue Pig built up to Andy’s specification. This now fulfils the nursery delivery and collection duties as well as A to B off-road blaster.

Andy is passionate about bikes and the enjoyment that can be had from them. In his 20 years in IT, predominantly within financial institutions, Andy has seen some pretty shocking customer service, and he’s keen not to fall in to the trap of taking his customers for granted. To that end, Andy strives to achieve an outstanding customer experience each and every time he works on a bike. You can always be sure of friendly, honest, open and accurate advice, with a price level to match. 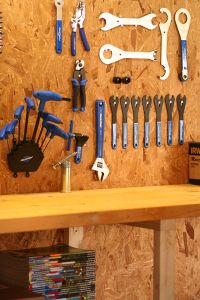 Having completed his Cytech Level 2 qualification, Andy recognises the need for top quality tools. That’s why he’s invested heavily in quality tooling, so that you don’t have to. Everything in the workshop has been sourced to satisfy a specific job, with no compromises.