Finally, and to paraphrase Huey Lewis and the News, we’re gonna go back in time. To a time when there wasn’t just Shimano and Campagnolo components (I don’t think SRAM had been invented at this point), but a host of other standards. One such example was the Benelux groupset which pitched itself against Campagnolo in particular. This Raleigh Blue Streak had a snapped gear cable, so I had to dig out the imperial spanners and set to work on it. Replacing the cable was tricky enough, but the gear adjustments were nothing short of Mission Impossible. Finally, all five rear gears were available (the customer told me the top gear had been unattainable for the last seven or eight years!) Thanks to Fibrax Limited for advising on this one regarding pull ratios and what would fit best. 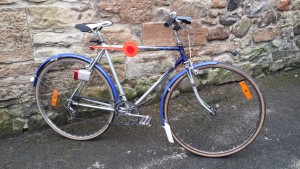