Finally, a Trek Bicycle Lexa. Its poor owner believes she is completely incompatible with this bike, but I think she’s just been unlucky. The bike spends its time between here and UAE, so is at the mercy of baggage handlers when being transported. No matter how well packaged bikes are, accidents can happen. And so it came to pass that the front wheel would not allow itself to be extricated from its dropouts. A bit of brute force and ignorance (mine) got it free, and it quickly became apparent that the non-drive side dropout had been damaged…essentially it had been squashed, thus trapping the hub locknut. With careful application of (controlled) force, the dropout was repaired. The fact that it was a malleable aluminium fork definitely helped, and because it was the dropout’s ‘mouth’, no repairs were required to the dropout proper. A tricky one, but a safe one. 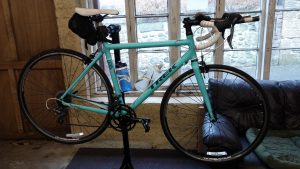